Some see it as a plague while others as an opportunity—either way, the Fourth Industrial Revolution will impact all industries, economies, and society at large. Also known as Industry 4.0, this revolution is marked by “a fusion of technologies that is blurring the lines between the physical, digital, and biological spheres.” Unlike previous industrial transformations, 4.0 is happening at a higher speed, indiscriminately disrupts across industries and economies, and will likely reconstruct entire systems. How will companies adapt to this accelerated rate of technological change? How will business ensure they can access the right talent in an ever-evolving landscape of skills?

Given the magnitude of this impending change, the Fourth Industrial Revolution took center stage at the recent Davos Summit. Global leaders from the private and public sector highlighted various noteworthy contextual barriers and potential solutions that companies should be aware of. 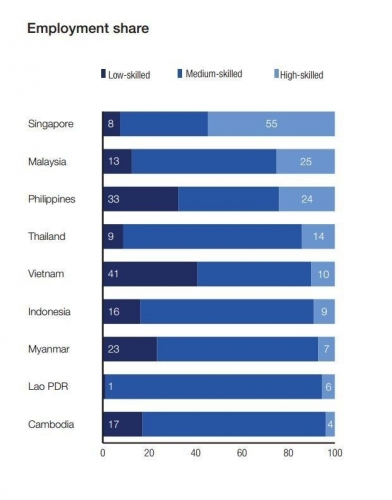 The future of work and digitization are key issues in Asia too. It has emerged as a new topic in the ELEVATE report Tracking the Trends 2019 – Volume 1. In the Asian context, a widening skills gap is becoming a growing challenge. Low-skilled, affordable labor historically propelled companies in the region, however, Asian businesses are increasingly depending on higher-skilled labor instead. Such high-skilled workers are difficult to find in most Asian countries. Though country level differences exist, there are various underlying commonalities exacerbating the skills gap issue in the region:

These challenges ripple through educational systems and governments to eventually funnel unskilled workers into a company’s talent pool. Consequently, many companies must rely on outsourcing to foreigners. Such short-term approaches can temporarily bridge the gap, but to be a sustainable company requires developing a strategy to successfully adapt to Industry 4.0. 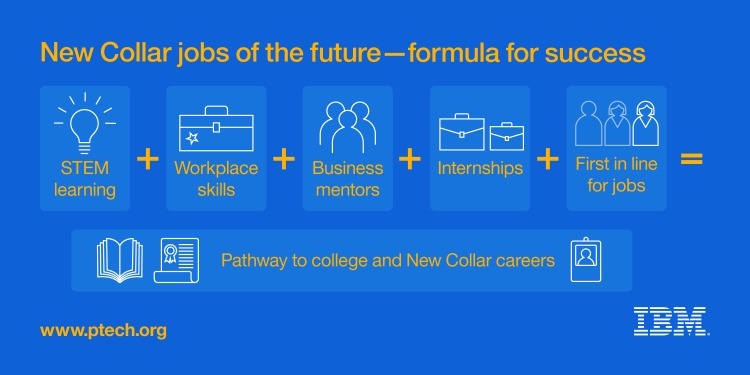 Part of the success of the P-TECH model is its focus on partnerships. By partnering with public schools and colleges, other companies and with government, IBM is enhancing the education system by promoting transformation in a long-term manner. This contrasts against one-off, short-term projects with non-profits.

As of mid-2019, 18 countries have announced the intent to open P-TECHs, or have already opened P-TECHs. Countries with P-TECHs in operation include Singapore, South Korea, Taiwan, Australia, the US, and Morocco. Additional countries include Argentina, Brazil, New Zealand, Italy, Canada, Czech Republic, France, Ireland, UK, Egypt, Philippines and Colombia. By end-2019, the total number of P-TECHs in operation will be 200.

CSR Asia Summit 2019: A Closer Look at the Future

This September 19 in Bangkok, IBM Asia Pacific will speak at CSR Asia Summit 2019 to share learnings from their public-private-partnership. The Developing Tomorrow’s Resilient Workforce Today panel will explore how companies and governments are adapting and anticipating the manner which the Fourth Industrial Revolution is changing the nature of work across industries and economies. UNESCO Bangkok and Multiverz will contribute governmental perspectives to this interactive dialogue while leveraging case studies from India, Singapore, and Thailand.

While technological-driven change is displacing jobs and threatening to exacerbate global inequalities by creating a tech divide, this panel will highlight how disruption is simultaneously creating economic and social opportunities. We look forward to having you participate in this important dialogue and welcoming you to our 13th annual CSR Asia Summit.

Sustainability solutions to shape your 2020

Our teams and our clients are taking a hard look at 2020. What will take your sustainability program to the next level?…

Rob will deliver a keynote address at next week’s CSR Asia Summit 2019 in Bangkok. Circulate Capital is dedicated to…