Hierarchy of needs: What stands in the way of women’s empowerment?

About once a week, a new client expresses interest in starting a “women’s empowerment program” in their supply chain. In part a response to the #MeToo movement, companies perceive a need for new initiatives to address gender issues proactively. This was echoed in our 12th annual Tracking the Trends volume 1 findings on Gender Equality: “Women’s economic empowerment is an important part of government policy in many countries but receives only limited traction in Asia.”[1] Some companies have anchored their brand identity to women’s empowerment. Others simply want to support a program that’s doing some good. To be successful in either case, we need to have a deeper understanding of the starting point.

Social audits show very low rates of sexual harassment in factories, as little as one finding per 10,000 audits. One, workers are intimidated to share this information with auditors and two, even if they did, it would need to be triangulated from another source in order to be validated as a finding.

Yet when we survey workers anonymously through their mobile phones, 1 in 4 workers in Bangladesh has witnessed or experienced sexual harassment at work. The question is deliberately phrased in such a way to allow workers to report on behalf of their colleagues, particularly for men to report on behalf of women who, despite having access to a totally anonymous channel, may still be too afraid to speak up. For that reason, when we segment the data by gender, we typically see higher reporting rates among men, especially in countries with higher incidence of sexual harassment, such as India and Bangladesh.

Research by Fair Wear Foundation and Care International found similarly high prevalence rates in Vietnam. Nearly half (43.1%) of 763 women interviewed in factories in three Vietnamese provinces said they had suffered at least one form of violence and/or harassment in the previous year.[3]

Through the Amader Kotha helpline (reaching 1.5 million workers at over 1,000 factories in Bangladesh), the second most common non-safety issue reported (after wage and compensation issues) is verbal abuse.[4] Over half of workers in Bangladesh garment factories report verbal abuse, but the issue disproportionately affects women as they are the majority of the production workforce yet they are under-represented among supervisors. Women who call the helpline and speak with the Phulki operators share stories of being told their whole lives that they are second class citizens and who, as a result, do not believe their worth. 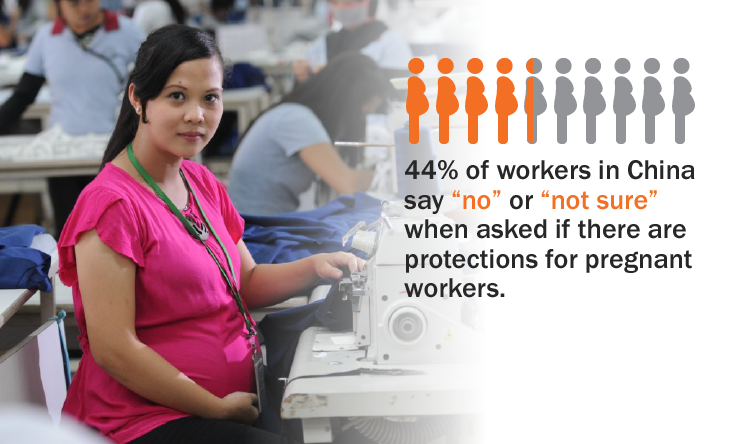 Our data also shows that 44% of workers in China say “no” or “not sure” when asked if there are protections for pregnant workers, i.e. to avoid hazardous work.[5] I think back to when I was pregnant with my own daughter. If I felt I could lose my job if I didn’t lift heavy boxes at work, I would have felt trapped. If a vendor or factory has a policy that pregnant workers are not required to do certain types of work, but workers are not aware of the policy and fear losing their job if they refuse certain tasks, it’s not actually protecting workers.

When we look at the goal of empowerment vs the status quo for many female factory workers, it’s a hierarchy of needs. How can a woman feel empowered when she faces persistent harassment, discrimination or gender-based violence?

At the same time, gender issues that come through audit reports (such as insufficient policies on discrimination) are transactional. They’re simply a line in a corrective action plan, with corresponding people responsible and due dates, and might entail, for example, raising the topic at the next meeting of the sexual harassment committee. Culture change doesn’t come through corrective action plans. It takes executive-level engagement and commitment. It takes broad-based awareness and communication. And it takes follow-through – walking the talk. Our Tracking the Trends insights from stakeholders suggested that “Companies need to do more to address discrimination, unconscious bias, and harassment and must ensure gender balance in management positions.”

How often do we see female supervisors or management in factories? If not, do they want to be? Better Work runs a program called Gender Equality and Returns (GEAR) to train female supervisors. On one hand, the direct beneficiaries of the program may be fewer than a typical “empowerment” program that works on self-esteem, etc. On the other hand, the indirect beneficiaries are many. They can include all the female workers in that factory who see her as a role model, all the male workers in the factory who see how effective a female supervisor can be, and her extended family who benefit from her higher earnings and greater opportunities for decades.

What can be done to remove structural and systemic barriers to women’s empowerment?

Is a corporate ethics line fit for purpose in the supply chain?

Extending a whistleblower hotline used for corporate or retail employees to the supply chain might not be fit for purpose. …

The Role of Business in Driving Down Air Pollution

Read blog
This site uses cookies to optimize your experience on this site. By continuing to use this site, you agree to the use of such cookies. Please click here to review our privacy policy.Accept & Close