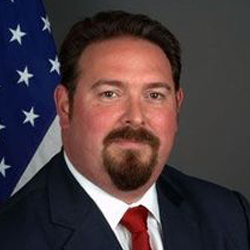 Ambassador Luis C.deBaca has negotiated law enforcement, labor, and human rights advances and managed multi-million dollar grant portfolios combating slavery and sexual abuse during his career in public service. As one of the United States’ most decorated Federal Prosecutors, he built his litigation record at the Justice Department’s Civil Rights Division into policy, transforming global anti-trafficking efforts and including voices of victims, workers, and advocacy community in decision-making. He investigated and prosecuted trafficking cases involving hundreds of victims, and while bringing their abusers to justice developed the modern “victim-centered” approach that is now the global standard for modern slavery cases. As principal DOJ drafter of the US Trafficking Victims Protection Act and a member of the team that negotiated the United Nations’ trafficking protocol, he helped to enshrine to “3P” approach of prevention, protection, and prosecution.

Following his prosecution career, Ambassador C.deBaca served in the Administration of President Barack Obama as Ambassador at Large to Monitor and Combat Trafficking in Persons (2009-2014), and as the Director of the Office for Sex Offender Monitoring Apprehending, Registering, and Tracking (2015-2017) Having retired from government service, he is working to ensure exploitation-free supply chains and financial flows, to amplify the voices of victims and survivors, and to establish information-sharing that makes communities, college campuses, and industry safer. He is a 2017-2018 Soros Open Society Fellow focusing on human rights issues and worker-led social responsibility and is a member of the Council on Foreign Relations.