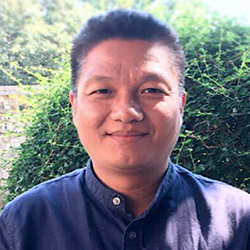 Aung Min Naing is ActionAid Myanmar’s Dry Zone Regional Manager with more than a decade of experience under his belt as a leader in tourism, social development, and emergency response. Coming from Northern Myanmar, Aung Min Naing’s witnessed experienced the struggles of his local communities first-hand. These experiences continue to drive his inspiration to overcome challenges in the development space and affirm his belief that change is possible.

Aung Min Naing holds extensive knowledge on Myanmar’s Delta and Dry Zone areas which consists of four regions: Magway, Mandalay, Sagaing and Irawaddy region. With a degree in Business Administration, whilst working with ActionAid he has developed Community Based Tourism (CBT) initiatives in Myaing and Pakokku townships as the first women-led CBT initiatives in Myanmar in 2015. During 2017 – 2019, he has received CBT Awards from the Tourism Board of ASEAN.

A strong believer in empowering communities, Aung Min Naing’s involvement with ActionAid Myanmar began in 2008 as an emergency response for the devastating Cyclone Nagris. This was when he developed a keen interest in social development. Since then, he has initiated trainings with young people, civil society organisations and Government officials. Likewise, he has engaged in training and conferences on CBT, Youth Empowerment and Emergency Response across Asia, Africa and Europe.