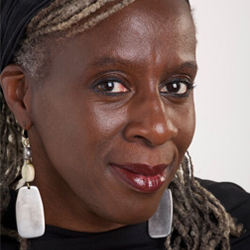 After an extensive acting career, Lola Young went on to become professor of Cultural Studies at Middlesex University, a writer, broadcaster and cultural critic.

Subsequently she became Head of Culture at the Greater London Authority before being appointed an independent Crossbench member of the House of Lords in 2004 where she founded the All Party Parliamentary Group on Ethics and Sustainability in Fashion and is Co-Chair of the APPG Sport, Modern Slavery and Human Rights.

Baroness Young has sat on the Boards of national cultural organisations, holds several honorary doctorates and has been a Chair of judges for the Orange Prize for Literature, and The Observer newspaper Ethical Awards and most recently was chair of judges for the Man Booker prize 2017. Baroness Young campaigns to improve legislation on modern slavery and transparency in supply chain reporting.