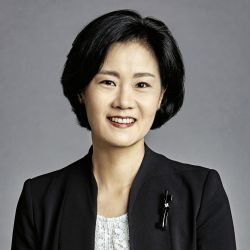 Before joining the GGGI in May 2018, she was the Ambassador of the Republic of Korea to Senegal and five neighboring countries from May 2016. She has particularly contributed to strengthen the development cooperation between Korean and West Africa. During her term, Korea drastically increased ODA in the region, having launched several new projects.

From August 2013 to April 2016, she was the Director for Strategy, Policy, and Communication at the Global Green Growth Institute (GGGI). During her term of office, GGGI Strategic Plan 2015-2020 was approved and streamlined governance structured was agreed.

As a career diplomat in Korean Ministry of Foreign Affairs, she has served as Director for Climate Change and Environment Affairs and Director for World Trade Organization (WTO). She led the national team in UN climate change negotiations and WTO DDA negotiations. She also worked for the OECD in Paris and the UN in NY.

She earned her Bachelor’s in political science and diplomacy from Yonsei University in Seoul in 1990 and her Master’s from the Jackson School of International Studies at the University of Washington in Seattle in 1996.