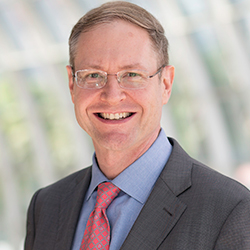 He was appointed Senior Vice President of Non-Gaming Operations in January 2018, and assumed leadership responsibility of areas including the Sands Expo and Convention Centre, facilities, sustainability, security and cyber security, as well as sales.

He is also the Chairman of the Canadian Chamber of Commerce in Singapore, on the board of the Singapore International Chamber of Commerce, and a member of the Workplace Safety and Health Council (Hospitality and Entertainment Industries) Committee for Singapore.

Ian began his career at the Banff Springs Hotel in 1983 as a bus boy, and has worked his way up through both Food and Beverage and Rooms before leading Global Reservations, Revenue Management, and Distribution for Fairmont Hotels and Resorts.

In 2003, Ian was appointed Hotel Manager for 1365 room Fairmont Royal York, and he was subsequently promoted to General Manager in 2005.

In 2007, Ian moved to Singapore in the role of Regional Vice President. In this role, he oversaw Fairmont’s growth and operations in China and Southeast Asia. His portfolio included the legendary Peace Hotel in Shanghai and the Fairmont Beijing which was voted the top hotel in China and Hong Kong on Trip Advisor.

Ian holds a Master’s degree and a Bachelor’s degree in Hotel Administration from Cornell University. He is also certified as a Journeyman Chef from the Southern Alberta Institute of Technology.