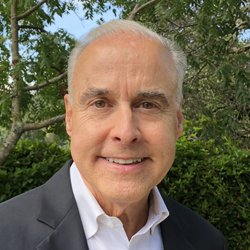 Jeff Macho is a Senior Advisor to ELEVATE and also serves as an Industrial Advisor to EQT AB, a global private equity firm founded in Sweden. He has strong experience in Global Sourcing, Supply Chain Management, Quality Assurance, Social & Environmental Sustainability in Consumer Product Manufacturing, and Multinational Organizational Design and Management across these functions.

Jeff was Chief Sourcing Officer and European Executive Board Member of C&A, an apparel retailer with more than 2000 stores in over 20 countries selling its own designed and sourced product. His responsibilities included strategically directing the development of the company’s global supply chain, planning/negotiating/procuring/delivering a half billion units of product annually, and managing & advancing the company’s sourcing operations worldwide. During this time, Jeff successfully led a major transformation of the total sourcing organization and the supply chain. His responsibilities at C&A also included the CANDA contract manufacturing division and the Sustainable Supply Chain organization, which ensured both social and environmental compliance & development throughout the total supply base.

Previously, Jeff was Senior Vice President of Walmart Inc. and Managing Director of Walmart Global Procurement, responsible for direct import sourcing of all product categories for each of Walmart’s retail markets worldwide. His responsibilities included Walmart’s overseas buying offices, and the functions of Sourcing, Quality Assurance and Social Compliance, as well as all supporting operations. Prior to this role, he was Vice President and Managing Director of Apparel, Accessories and Footwear for Walmart Global Procurement.

Jeff earned his Bachelor’s degree in Business Administration from the University of Notre Dame in the United States, and also studied in Austria and interned in Norway. He received his MBA from the the Kellogg School of Management at Northwestern University, where he was accepted into the accelerated study program, concentrating in Marketing and International Business. He moved to Asia in 1994 and lived in Hong Kong and Shenzhen, China for more than 20 years, until relocating to Brussels, Belgium in 2015. As of 2018, Jeff resides in the San Francisco Bay Area.