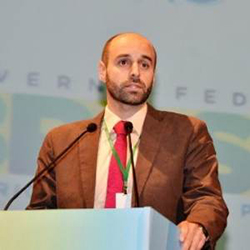 Jeroen Beirnaert is the Human and Trade Union Rights Director of the International Trade Union Confederation, a global umbrella for national trade unions centres with a presence in 163 countries. He has over a decade of experience working for the ITUC at the global level. He coordinates human and trade union rights policy and action by and between trade unions and with governments, businesses, NGOs and other stakeholders in countries where rights are most at risk. Prior to taking up his current position in 2017, he specialised in policy and strategies to effectively organise and protect the most vulnerable workers against exploitation and built up extensive experience and expertise on the topics of forced labour and human trafficking. He played a key role in building awareness of contemporary forms of slavery within the global trade union movement and thus contributed significantly to the adoption of the ILO Forced Labour Protocol in 2014 and to the creation of the current political momentum to address the issue.