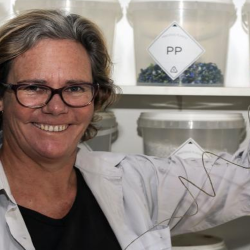 Louise Hardman is an environmental science educator based in Australia. She worked as a Zoologist throughout Australia for over 15 years, particularly in the marine, wetlands and conservation fields.

She developed a mobile lightweight recycling machine called the Shruder TM, which shreds and extrudes plastic waste. These machines are designed to be transported to communities suffering the impact of plastic pollution, particularly in remote and isolated regions.

By creating purpose-built mobile plastic-recycling machines and developing a specialized and unique training programs for remote and island communities to reduce and reuse plastic waste, Louise has become a specialist in the chemistry of plastics and zero-waste education which empowers communities to turn waste into resources.

She previously worked for 10 years as a high school science teacher, specializing in Chemistry, Biology and Marine Technology, while also working at the National Marine Science Centre as an educational guide for five years.