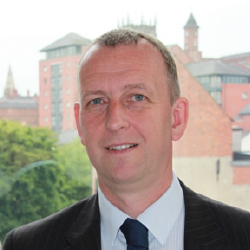 Mark joined the Gangmasters and Labour Abuse Authority (GLAA) in 2005 and is now Deputy Director for Business Change. He has a background in law enforcement and has held several roles within the GLAA.

Mark has led on prevention and partnership working. He has written the GLAA Policy and Procedures for dealing with Human Trafficking and Forced Labour, contributed to the development of guidance for Police and written guidance regarding spotting the signs of labour exploitation. He has also delivered on training programmes for the United Nations Development Programme and for the Dubai Judicial Institute. He has represented the GLAA at national and international conferences in relation to tackling labour exploitation.

In particular he has led on collaborative initiatives with the private sector to provide guidance and training in relation to trafficking and contributed to a number of voluntary codes of practice for areas where regulation has not been available. This has included raising awareness of risks with labour supply chains and how they can be mitigated. He has recently led on the development and introduction of the GLAA Construction Sector Protocol.