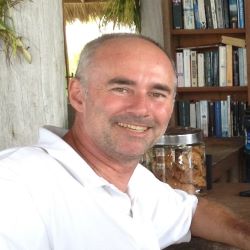 Andrew trained as a chartered accountant in Sydney and spent the first 20 years of his career working in banking in finance. From Sydney he traveled to Chile to work, then London and on to Singapore where he lives today. Whilst in Singapore he stumbled across the unspoiled beaches and islands of nearby Indonesia. Together with some friends they acquired an island called Nikoi in 2004. Plans to develop it were hatched whilst camping on the island with their families.

Nikoi opened in 2007 to the public and very quickly became a popular destination for Singapore based expats looking for an escape. Built from driftwood and without air-conditioning Nikoi is unique and has won a slew of responsible tourism awards. The success of Nikoi led to Andrew quitting his job in 2008 to focus all of his efforts on their future plans. They acquired Cempedak Island which was built using bamboo as the primary building material.

In 2010 Andrew and his partners established a foundation called The Island Foundation which helps to improve education standards among local children. They have established 8 learning centers and have over 500 children registered in their programs and through their teacher training workshops impact over 10,000 villagers.