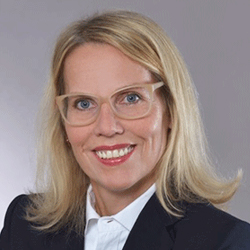 Since January 2015 she works as Director of Programs & Risk Assessment in the Corporate Responsibility department. Among other things she is responsible for the development and implementation of standards & policies and program management. One of the main topics Britta Gallus is currently dealing with is transparency in the supply chain. This covers transparency, traceability and social compliance.

From 2011 until 2014 Britta Gallus worked for METRO AG as Head of and Director of Group Regulatory Affairs. In this position she has been representing the company in European and international committees and supported the implementation of certain rules and commitments.

From 2002 until 2011 Britta Gallus worked for the HDE (Handelsverband Deutschland e.V.) as Director of European Affairs and was in charge of the HDE Brussels office. Her responsibilities included representing interests of retail in Brussels, European committee work and intensive monitoring of the European legal activities.

Britta Gallus finished in 1997 the second state examination in law.