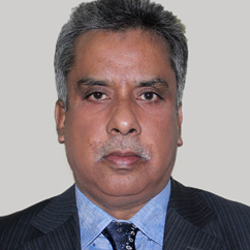 Mr. Md. Fazlul Hoque is one of the most dynamic leaders in the Bangladesh apparel sector. He has been extensively involved in the industry for over 20 years, and has served as the President of the Bangladesh Knitwear Manufacturers & Exporters Association (BKMEA) during three consecutive terms from 2004 to 2010.

During his tenure as BKMEA President and as President of the Bangladesh Employers’ Federation (BEF) from 2011 to 2013, Mr. Hoque has conceived and implemented pioneering initiatives to improve workplace safety and benefit workers. Despite being a representative of business owners, he has been acknowledged as a ‘pro-worker’ leader.

He was the first person from Bangladesh to serve as a board member of the International Apparel Federation (IAF). In addition, he has held senior roles with the Federation of Bangladesh Chambers of Commerce & Industries (FBCCI), SAARC CCI, International Chamber of Commerce (ICC), Bangladesh and other industry-leading organizations. He has served as delegation head and guest speaker at conferences, summits and forums worldwide on behalf of the Bangladesh government and the knitwear industry.

Mr. Hoque is now Managing Director of Plummy Fashions Ltd, one of the greenest knitwear manufacturers in the world. Recently Plummy Fashions earned ‘National Award on Environment’ from the Honourable Prime Minister of Bangladesh.