Beyond a desire to save tigers and pandas from extinction, biodiversity is critical for business, with natural resources and services contributing an estimated US$125 trillion to the global economy every year.

One of the most fundamental ways we depend on nature is for food. Biodiversity, as relates to food and agriculture, is the variety of both domesticated and wild plants and animals that are harvested for food, fuel and materials. It also includes organisms that provide essential services, such as bees and other pollinators, mangroves that protect coasts from extreme weather and provide nurseries for fish, and fungi and microbes that purify the air and water and help keep soils healthy.

What is the current situation?

According to a recent UN study, a decline in biodiversity spells trouble for the future of food production. Gathering data from 91 countries, the UN Food and Agriculture Organisation (FAO)’s report is a first-of-its-kind global assessment of biodiversity for food and agriculture. Some startling statistics include:

Why is this happening?

According to the report, there are several drivers that negatively impact biodiversity. Chief among these is changes in land and water use and management – in the tropics and sub-tropics, the expansion of large-scale agriculture accounted for 40% of forest loss between 2010 and 2015. Other drivers include pollution and overuse of external inputs, and overharvesting. On top of these, the situation is exacerbated by climate change, an growing global population and increasing consumption of meat and animal products.

Why is this important?

By 2050, the global population is expected to be almost 10 billion people (3 million more than there were in 2010). According to WRI, this will require require a 56% increase food calories and an additional 593 million hectares of agricultural land (an area nearly twice the size of India) compared with 2010, under a business as usual scenario. On top of that, we must reduce the greenhouse gas emissions from agriculture overall, to keep global warming below 2oC and avoid the worst impacts of climate change. 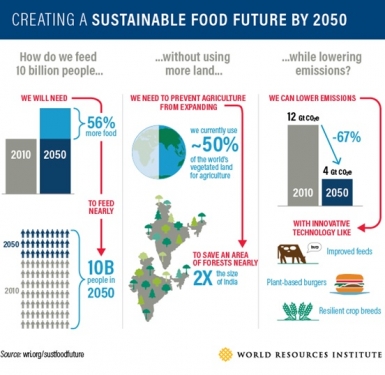 Protecting biodiversity and restoring natural ecosystems is one of the major ways in which we can increase productivity of existing agricultural land and fisheries, and make our food production systems more resilient to climate change and outbreaks of disease and pests.

We need to radically rethink our food production systems. By honing our understanding of the relationships within natural ecosystems and working with them rather than against them, we can enhance food security for future generations. One of my favourite examples of sustainable farming comes from the TED Talk How I fell in love with a fish, by renowned chef and food writer, Dan Barber. Veta La Palma, a commercial farm in southern Spain that could be mistaken for a nature reserve, produces 1,500 tonnes of extensively farmed sea bass, sea bream, sole and shrimp per year. As Barber describes, this is a farm that (1) does not feed its animals – it provides suitable conditions for algae and phytoplankton to grow naturally, which feed its fish; and (2) measures its success on the health of its predators – it loses 20% of its fish stocks to the over 250 different species of birds that visit its ponds. The challenge will be how to develop and scale up more of these types of food production practices.